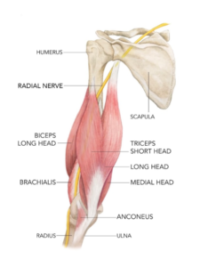 The triceps brachii  (three-headed upper arm) muscle is a large muscle of the back of the upper arm. It is the primary muscle used for elbow extension (straightening the arm).

Trigger points occur in all three heads but referred pain from the long head is the most common. Referred pain from the long head occurs up and down the back of the arm and to the lateral (outside) epicondyle (bony bump) with a spill-over pattern between the shoulder and neck. Trigger points in the lateral head refer to the middle, back of the upper arm, and may include the fingers. The medial head refers to the medial (inner) epicondyle, forearm, and fingers. The anconeus referral pattern is small, focused on the lateral epicondyle.

The long head originates on the shoulder blade. The other two heads originate on the humerus (upper arm bone). All three heads converge into a single attachment on the ulna (forearm bone running from the elbow to the little finger side of the wrist).

All three heads extend the elbow but the medial head is the prime mover. The long head also adducts and assists in extending the arm at the shoulder. The anconeus muscle, sometimes called the fourth head, is an extension of the triceps below the elbow that provides stability.

Biceps brachii trigger points are typically activated from repetitive or stress overload in activities that involve straightening your arm. Examples include desk work, driving, or other handwork without effective elbow support.